(This is the second post i wrote on intelligence amplification while in high school, after IA 2. But interestingly, i actually came up with this idea first. When i first thought of the idea, it wasn't even as a form of IA, but rather i wanted to use it as a method to increase empathy and understanding, and as such achieve world peace. I would discuss the idea with my physics teacher after school, i consider him to be one of my mentors, he called it 'The Panacea'. Though.. he also told me that the road to evil, is paved with good intentions.. )

This form of IA (intelligence amplification) I call, the Ansible (stole the name from the book Enders Game)


What is The Ansible?
The Ansible is like the next step in the evolution of the internet.

Imagine if I we're able to connect my mind to yours. So far to the point where the neurons in my brain fire in direct correspondence with yours.
I would know your every memory, your every thought, I would fundamentally understand you, and you would understand me. When we communicate, it would be like having thousands of conversations every second.

You and I would be connected at a level never experienced before by any other human. We would also never hate each other, because we would fundamentally understand each other.
Imagine, I would literally be able to see through your eyes, and you through mines. I would experience all your senses, and you would experience all of mines. We would no longer be two separate beings, but instead we would be one being. Imagine having two frontal lobes, better yet, imagine having a brain twice the size of your own.
Imagine the things we could do with our combined intelligence. The power we would have is incomprehensible in our current state.
Let's take it a step further, instead of having just us two connected, imagine having the entire world connected. There would be no more war, no more famine, practically all the problems we face now would be eradicated.

But to be honest, solving all the worlds problems would be nothing but a small by product of our connectivity when in the face of what else we could do. Imagine what actions a being with 14 billions times (the projected human population 2050) the mental capacity of your own would take on? You can't, you or I cannot even begin to fathom what this thing will think, or do. It is truly beyond our Comprehension, I would also argue, that it is in fact our next, and last step in "human" evolution.

So how would I even begin to bring such an idea into existence?

i will use the technology Edward boyden brought into existence from part 1 of this idea.
but instead of having the lasers fire whenever a transistor fires. I will instead make them fire whenever a neuron in another persons brain fires.
When a neuron in your brain fires, it will be sensed by a sensor in your brain. That sensor which is connected to a transmitter will then send a signal to the sensor in my brain. That sensor in my brain will then tell the laser in my brain to fire at the corresponding neuron in my brain. Effectively transferring information from your brain to mines. Now imagine that happening at the speed/rate at which our neurons fire. Where instead of just one laser firing, you have hundreds of millions firing off in your brain and mine.
It would be as if the axons in my neurons stretched outward and connected to your neurons and vice versa.

As you can see the technology required to do all of this is beyond what we currently have. But in the coming years, that will change.

This idea will be my last to accomplish, set for 2050. Why last? Because when I do accomplish this, there will be no more me, it will only be us, or rather, it. I will no longer exist as a individual, but instead, as one part of a whole much larger being.

When people talk of the coming singularity, I would like to think, that my idea is that singularity.

Even though i did say the actions of such a being would be beyond our comprehension. I do think its actions are still slightly predictable.

The core reason for connecting, was to amplify intelligence.

With our computers it's transistors, with the brain, it's neurons.

So what this being would want, is more bits, no matter what computational system it uses. It may be so intelligent that it comes up with a form of computation far beyond neurons. Nonetheless that form of computation will be comprised of bits, and those bits will require matter, resources, to form them. So the goal would be to make as many as possible, but to do that, you would want to make them as small as possible. To take up less resources.

This is why I come to the conclusion that it will strip the earth down to nothing. It's also why I think it will be some sort of dust like metallic organism moving throughout space.

There will be no humans, nor do I think there will even be remnants of human ideas within this organism. The only thing it will strive for, like all extropic forces, is more control, more power, And as such, more intelligence 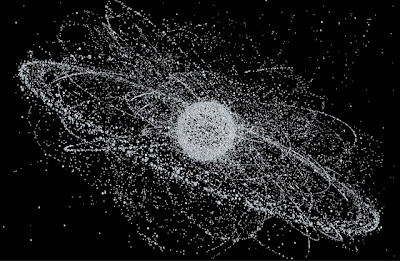 It will move throughout the universe as this mass of sand like particles consuming all matter in its path and incorporating it into itself, and as such, impregnating the universe with consciousness.

I honestly think that potentially no later than 2100, there will be no earth. Just an empty pocket of space where it used to reside.

It matters not if people agree with this or not, It will happen.

If I connect my mind with some one else, that person and I, would become one being. We would have twice the amount of neurons than the average human being. With just us two connected, we would be far more intelligent than any human being in existence, or to ever come in existence.
That's with just us two, Imagine with 4, 100, 1000. The intelligence of such a being would be far beyond any of our comprehension.

No one could stop it.

Some people may make the argument of numbers, as in because possibly more people will disagree with such a future, they will stop it.

But when a few humans herd hundreds cows, and guide them to their inevitable slaughter. It mattered not how much the cows disagreed with such a future, let alone able to comprehend its possibility. It mattered not that physically, cows could easily outmatch a human. They are still entirely helpless to stop their future. Why? Are they not bigger and stronger? Are they not more numerous? Yet some measly hairless ape, with no claws, sharp teeth, and little muscle mass. Is able to manipulate them all to its will. Why? It is because that ape, is far more intelligent than any cow.


I think this qoute sums it up pretty we'll.

"You can get better and better at knowing how the universe works and why - or you can become food for the systems that do. There is no other option." - Randal Lee Reetz